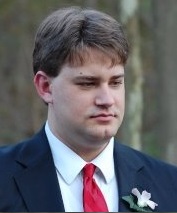 Do you have a favorite line or lines from your accepted pieces for The Ginger Collect?
It rained the night before, and everything was glazed and glistening with the lights from our car, while the clouds hung like curtains over the sky.

What inspired your piece?
This piece was inspired by the various road trips my father and I have taken (and still take), and specifically the Salvador Dali painting “Architectonic Angelus of Millet.”

Who is your most influential writer? Who do you always go back to for inspiration?
I have drawn influence from many sources: Stephen King, Ernest Hemingway, Karen Russell, but the most influence has come from David Foster Wallace.

What do you want readers to take away from your piece?
I want readers to go on a journey with the words here in and enjoy the ride. I want readers to piece together the open ended vagaries that this story creates into what it means to the reader on a personal level. But most importantly I simply want people to read what I have written.

What season do you find you write the most in?
I write an awful lot all year round, but I probably write the most in autumn largely because of the NaNoWriMo contest, which I’ve participated (and succeeded) in for the last 9 years. This piece in particular was written (as an unrelated bonus) for the contest in 2015.

What is your ideal writing environment?
Underground, alone, with my feet up, a computer on my lap, and TV close by playing cartoons that I’m not specifically paying attention to.

Do you find writing invigorating or exhausting?
Neither, I find it compulsive.

Do you keep any snacks around while you write? If so, what’s your favorite?
I do not generally snack during writing.

Do you ever create soundtracks for the pieces you’re writing?
I love music almost as much as I love writing. Many of my pieces (especially the longer ones) have obscure songs thrown into them that make up a soundtrack. However that is not the case with this story. But if I had to choose a good song to go along with this particular story, I would recommend Toru Takemitsu’s “And Then I Knew Twas Wind.”

Do you have any future writing plans?
Yes, Many. I’ve started sending out query letters trying to publish my first story collection, which for now is designed to emulate an old tape recorded off TV. Complete with TV shows (short stories) commercials (flash fictions) Station Bumps, and Static between recording sessions. The title of this collection (for now) is: The Boy Scout Camp at the End of the World: A VHS Mixtape.

You can read Zach Smith’s piece in Issue Four of The Ginger Collect: Architectonics After the Rain.